Jenatzy is known for breaking the land speed record three times. On January 17 1899 in Achčres, France he achieved a speed of 66.66 km/h (41.42 MPH) over 1 kilometer, driving a CGA Dogcart. That same day the record was broken by Gaston de Chasseloup-Laubat, but ten days later on January 27 he achieved a speed of 80.35 km/h (49.93 MPH). This record was again broken by Chasseloup-Laubat, but Jenatzy set his third and final land speed record on April 29, reaching 105.88 km/h (65.79 MPH) in the CITA No 25 La Jamais Contente which was an electric vehicle. This was the first record over 100 km/h.

Jenatzy died in 1913 in a hunting accident. He went behind a bush and made animal noises as a prank on his friends who were hunting with him. It worked too well, they heard the noise and shot because they thought there was an animal there. When they realised it was Jenatzy they tried to rush him to hospital but he died on the way. This fulfilled his own prophesy that he would die in a Mercedes.

In 2003, the Irish arranged a phenomenal retrospective event to mark the centenary of the first really big motor race in the British Isles, the Gordon Bennett Cup meeting of 1903. "British Isles" because when S F Edge's Napier won the 1902 event, and his home country then had the honour of staging the following race, the stuffed shirts in Westminster had already banned motor racing on public roads in England, Wales and Scotland.

Fortunately, that prohibition didn't apply in Ireland, and a circuit was devised, based on Athy, south-west of Dublin. Not just a single circuit layout, but a figure of eight. Cars had to do three laps of a 40-mile eastern section and four laps of a 52-mile western circuit; but those seven laps added up to a race distance of 327 miles.

Open-road racing had been causing concern on the Continent, especially after a spate of accidents caused the Paris- Madrid race to be abandoned, but the Irish authorities made sure the 1903 Gordon Bennett race was effectively on closed roads: a force of no fewer than 7000 uniformed policemen controlled access and looked after spectator control.

For a full account of the preliminaries, the race itself and the personalities concerned (as well as the lofty attitude of the French contingent to Irish cooking and Irish whiskey) read Brendan Lynch's Green Dust: Ireland's Unique Motor Racing History 1900-1939, first published in 1988, or his new book The Irish Gordon Bennett Cup Race 2003, both published by Portobello Publishing. There's also much more about both 1903 and 2003 events, books on the subject and even a 1903 Pathé newsreel, on www.gordonbennett.ie.

100 Years On
While the retrospective was held on May 31-June 2, the actual race date was July 2; so here's another opportunity, in the 100th anniversary month, to celebrate a CARkeys hero - Camille Jenatzy (pictured here and at top of page), the Red Devil, the first driver to put the World Land Speed Record over 100km/h with the battery-powered La Jamais Contente, and the man who was reported as having been beaten in the 1903 race, by the French magazine l'Auto, which went to press a little too early.

The amazing thing about Jenatzy's Gordon Bennett victory for Mercedes (no hyphenated Benz in those days, of course, when Mercedes was a model range in the Daimler catalogue) was that the Stuttgart factory got any cars to the start line at all.

Chief designer Wilhelm Maybach had come up with a powerful 90bhp 12.7-litre engine, and the race cars were narrower than usual, fitted with sporting bodywork by Auer of Cannstatt. At the same time as the three Gordon Bennett racers were under construction, three less powerful 60bhp (truthfully, 65bhp) 9.2-litre cars were being built for private customers.

Once finished, the three private cars were sent to another factory to await collection by their owners, while the Gordon Bennett team cars were still at the original factory, ready to be loaded onto a railway wagon. In the middle of the night of June 10, fire swept through the factory. The whole place, with the 90 cars inside it (including the Gordon Bennett entries), was burned out.

Daimler didn't mess about, but immediately arranged to buy or borrow three 60bhp cars from their private owners, and set about turning them into full race trim. Once that work was completed, time was so tight that the cars couldn't be sent by rail, but were driven overland, via two ferry crossings, to Dublin.

Jenatzy drove his usual dramatic race, at one time avoiding a crash when he encountered a doctor's car which had come the wrong way onto the circuit when called to attend the victims of a race accident. He gained a well-deserved reputation as the last of the late brakers, and while other drivers steered well away from the bankings, he was ready to put a front wheel up on one if that would help his cornering speed.

When other drivers stopped at control points for a rest or a sandwich, he stayed in the car, impatient to get away again. And in the later stages of the race, needing all the aerodynamic help he could get, he pushed his mechanic down under the fascia, out of the airstream.

French Press Getting It Wrong
In mid-race, he was behind the French favourite Réné de Knyff's Panhard, and that was what provoked l'Auto into the fat-headed decision to go to print with the race "result" before the competition had finished.

While the report was being written, Jenatzy had sized up the situation, and speeded up. And when the Belgian speeded up, that meant absolutely flat out. He finished in 6 hours 39 minutes and, as quoted by Brendan Lynch, explained afterwards what it had all been like:

"The car in which you travel seems to leave the ground and hurl itself forward like a projectile ricocheting along the ground. As for the driver, the muscles of his body and neck become rigid in resisting the pressure of the air; his gaze is steadfastly fixed about two hundred yards ahead; his senses are on the alert to detect the slightest abnormal signs."

As for driving into the dust cloud that conceals a slower car in front: "When you finally emerge, you see the rival car only a few yards ahead, and the dust cloud changes into a trail of flints and pebbles. If the other competitor sees you he will draw aside, but usually he does not heed your signals. There seems to be no room to pass, yet you pass all the same . . ."

As with all the great races of the pioneering era, there's no need to smile with the benefit of hindsight at a winning average of "only" 49.25MPH.

Mercedes gained great publicity from the victory. The winning car went back to the private owner who had loaned it free of charge for Jenatzy's use, the American Clarence Cary Dinsmore, who rarely gets the acknowledgement he deserves. And the Red Devil once again side-stepped the prophecy he had made about himself during his racing career, that he would die in a Mercedes.

The day was coming, though. Brendan Lynch recalls that, ten years or so later, hiding from his companions during a hunt in the Ardennes, he jokingly made sounds like a boar in the forest. One of his friends took it for the real thing, aimed and fired. Jenatzy died in the car rushing him to hospital: you know the make. 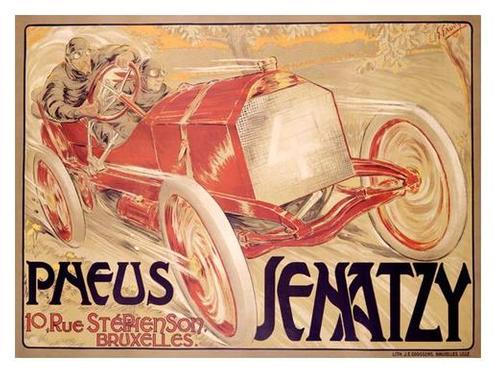 Jenatzy part of the Gullwing Group of Companies.

Free Consultation
Our years of experience ensures that we quickly define your needs and reduce the design cycle by months.

Our experienced design team will help compress the design cycle so you get your product to the market faster.

Contact Us Today
Contact us today for a free design consultation with one of our design specialists.